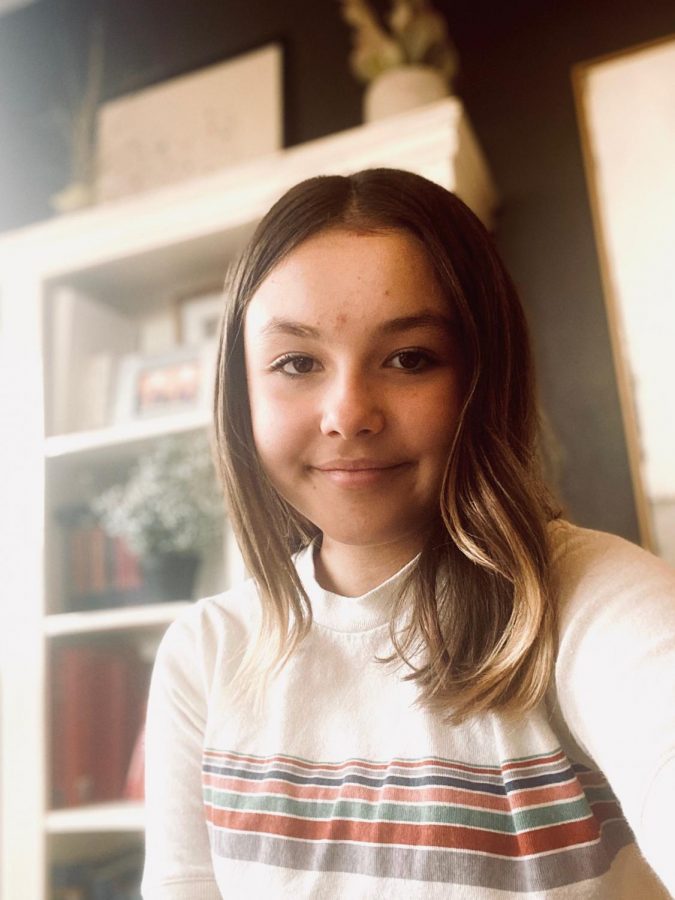 Albuquerque Academy welcomes sixth grader Annaleigh Sanchez to the class of 2027. Sanchez went to Coral Community Charter School, a single-gender-class school in southeast Albuquerque, starting in 4th grade, and was homeschooled through Classical Conversations until that point. She is currently in piñon pod.
Though Sanchez initially wanted to go to Bosque, it was the community at Albuquerque Academy that ultimately drew her here. “When I was younger, I always wanted to go to Bosque,” she said. “But when I got older, I started looking into more schools. My friend told me about the Academy. So I looked into that, and there’s a lot of things I liked about the school–the way they teach and the people and everything.” She was very excited when she found out she got in, as Academy was her top choice for middle school.
One of the biggest differences between her old school and Academy is the size. Coral is a small school with a small student body of roughly 250 students total. On her buddy day last year, the spot that stuck out to her the most was the dining hall. “Since Coral was such a small school, we always ate outside, or some classes in the cafeteria, but we had a very small cafeteria. So it was really cool seeing all the food and all the tables assigned and everything. That was exciting for me,” she said.
The unconventional start to this school year has impacted 6th graders especially hard, considering they don’t know most of their classmates. Sanchez is grateful to have one of her friends from dance in her family. “It’s hard to get to know people on zoom,” she said. She’s enjoying her classes, and her favorite class is math with Mr. Montaño. But she admits that it’s weird taking classes on zoom and she didn’t know what to expect about starting school online.
In her free time, Sanchez loves dancing. She’s been dancing since she was three years old, and has done ballet, jazz, aerial silks, lyrical, tap, and hip hop. She’s taking dance class with Ms. Lang as her performing art elective, and is focusing on ballet, jazz, and modern dance. The virtual dance classes have exceeded her expectations, and she said she’s learned more than she thought she would. In the same vein, she enjoys other performing arts, and is looking forward to starting drama class. She hopes to join En Pointe, an extracurricular ballet club someday.
Sanchez and her family are very close. She skateboards with her cousins, picking it up over quarantine. Her cousins have been skating for as long as she can remember, and she’s been spending a lot of time at their halfpipe. Once quarantine ends, she’s looking forward to spending a lot of time with her family. “My cousins and I are pretty close. And so a lot of times, we’ll have parties at their house for different reasons, and I miss those,” she said. “I think we’re going to do a party making up for all the holidays from this over quarantine”
One thing Sanchez wants people to know is that once you get to know her, she’s goofy.“ I like to make jokes and I like comedy and stuff like that,” She said with a little laugh. She admits that, on zoom, this side of her doesn’t shine through as much, however, she adds, “When you get to know me, I have a big personality.”