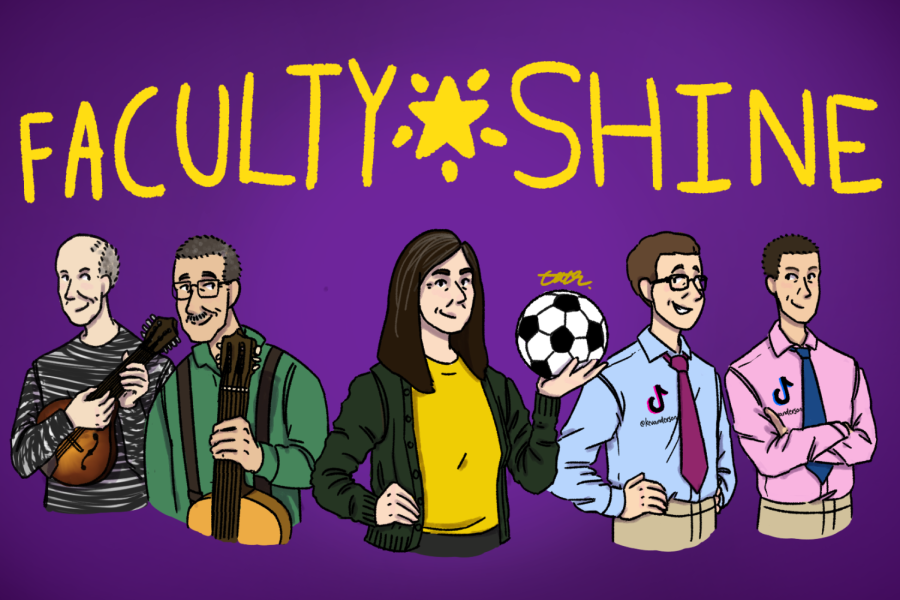 From Beachball Ballet to the greatest hits of 1910, 10-12 teachers strut their stuff. Original Art by Ell Bueno '24

The Faculty Shine finally happened on Monday, April 11th at common time for the 10-12 Division! Perhaps you read my first article published on April Fool’s Day that previewed the event, or perhaps you delete any email The Advocate sends you. Nonetheless, teachers did not disappoint this year during the real thing. Here’s the rundown.

The mid-day extravaganza began with a collection of teachers with microphones forcefully reminding us to sit with our advisors and reminding the advisors themselves to take attendance. Clearly, the teachers were fearful that no one would show up for their performances, so they had to put some threatening rules in place.

After Dr. Lenhart coerced the entire division to chant “Chargers” and to do the wave twice, Faculty Shine was underway with forced school spirit, but school spirit nonetheless! Mr. Kevan was first up with one of the most astonishing magic tricks I think any of us have ever seen. After plucking Ms. Abbott from her seat, he had her pick a card from the deck, show it to the audience, and then return it to the pile. It is slightly unclear if this was the same pile he had her remove a card from or not… but after shuffling all 52, he successfully found that exact same card. Thunderous applause erupted as Ms. Abbott returned to her spot in the audience and Mr. Kevan backpedaled off the stage.

The next act was entitled “Packowitz and Friends” according to Dr. Lenhart, which was a tad odd since “and Friends” included Head of School Ms. Julianne Puente. Regardless, everyone arrived on stage and Mr. Lipkowitz introduced the act as, of course, music he and Mr. Packer love and no one else has heard of. Once Mr. Packer whipped his lanyard around so it was dangling on his back, everyone knew it was go time. The group played two Ukrainian Jewish folk songs that sounded absolutely lovely, and, as Mr. Lipkowitz said, the next time any one of the 10-12 students is at a Ukrainian wedding, they will be able to hum along! The group departed to an excited round of applause and Dr. Lenhart took this as her opportunity to tell some jokes. She told one math joke and one science joke, but it was a little hard to pay attention because a big red mat was being carried out onto the stage, so everyone was wondering if someone was going to be falling in the near future.

We didn’t have to wonder for long, though, because out marched Mr. Lucero accompanied by Mr. Orozco to do a martial arts demonstration. As Lucero explained what he was about to do, the audience couldn’t help but notice the growing fearful expression on Orozco’s face. It appeared that he was about to be thrown to the ground not one, but four separate times, and perhaps he had just realized what he signed up for when replying to Mr. Lucero’s email to the faculty pleading for a brave assistant. So, thrown to the ground he was by Mr. Lucero, someone noticeably taller and larger than him. It was a fantastic demonstration not even prefaced by “don’t try this on your own,” so perhaps there will be other, less coordinated reenactments on the quad for us to all observe.

Up next, we had the return of Mr. Kevan, this time accompanied by Mr. Anderson, putting on Kevanderson’s Beach Ball Ballet. This was a striking performance that has clearly taken months of practice from the Deans. When they’re not monitoring phone usage at lunch or sending passive-aggressive emails to the entire 10-12 Division about leaving campus, they’re in Simms dancing together. This costuming, choreography, and coordination masterpiece had the entire auditorium stunned, for the duo has gone from twinning in business casual to twinning in tie-dye and tutus. Their act really was extraordinary, and it’s one we’ll all remember for a long time.

The final act was more of two acts in one. It began with a bunch of teachers in costume deploying their rock band instrumental skills by playing rock and roll music. There were guitarists, saxophone players, singers, drummers, and more. Partway through, Mr. Kim took off his headpiece and we could finally see who it was that was so committed to playing the cowbell. He didn’t miss a beat. Later on in the act he switched to a maraca, and was once again very theatrical, executing his part better than anyone could dream of playing a percussion instrument. After the rock and roll portion (and after a very peculiar fish and alligator combo danced around on stage), the music took a turn. Mr. Connolly took his place at the piano, Ms. Matton sat down with her guitar alongside Ms. Puente, Ms. Matter revealed herself as the bassist in the rock band, and Ms. Sheridan Johnson strode up to the microphone. Johnson expertly belted out the song “You Can’t Always Get What You Want” by the Rolling Stones while students cheered her on and faculty members on stage jammed out with her. It was a beautiful, collaborative end to a fun-filled talent show that everyone thoroughly enjoyed.

The third annual Faculty Shine was an astounding success! The English Department had the most faculty participants with four, while the Language Department had no brave members willing to perform in front of their supportive, but perhaps critical students. Maybe next year! Despite there being no hula hooping Wordle competitions between the English teachers or interactive yoga demonstrations from Mr. Murphy, the 10-12 Division had a fabulous time supporting their talented and hilarious teachers, and everyone is already excited for next year’s show.