How Can Students Improve SAGE Dining? 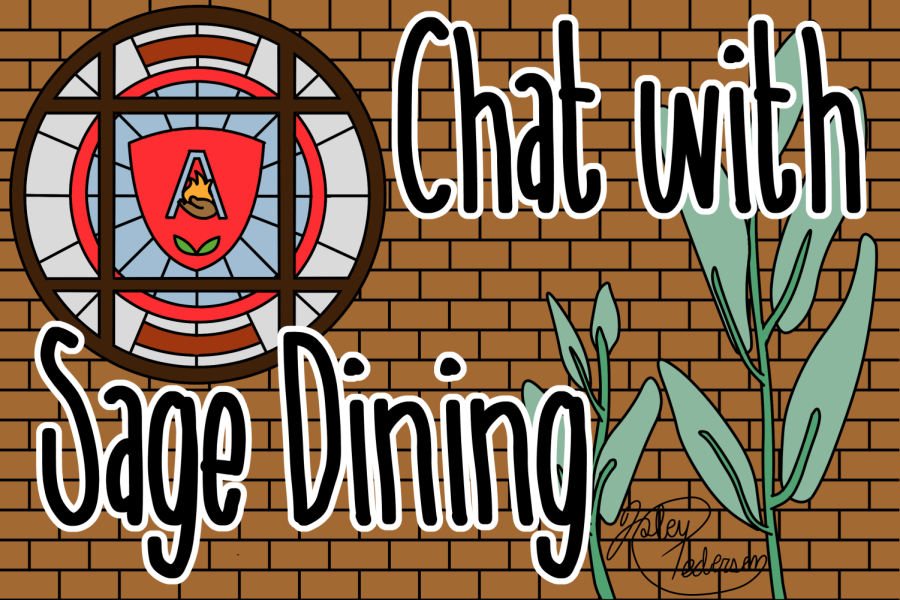 “They didn’t have a very good vegetarian selection today.”
“I didn’t see any more sandwich bread or salad in the dining hall during the second lunch! That’s the only thing I eat.”

Comments like these were popular before winter break and many students agreed with them. I sometimes found myself agreeing with comments like these and even making a few of my own. After weeks of hearing the same complaints, I decided to take action. Before winter break, I had the opportunity to interview Mr. Steven Fernandez–Food Service Director at the Academy for Sage Dining. This eye-opening interview completely changed my perspective on our lunch food as well as the perspective for this article.
For countless years, Albuquerque Academy has provided healthy lunches for their students in order to get them through the day and any extracurriculars they may be a part of. However, there are many things that students and staff don’t know about the lunches they eat every day. Here are a few things I learned:

-The dining hall menu is flexible and created around known dietary restrictions present at school.
-There is a four week rotation of meals in order to keep the food diverse and production well-managed.
-The four week rotation also helps them combat food waste. Mr Fernandez describes this, saying, “We can refer to our production record and say hey, we use this sausage, this many pounds and that was either a perfect amount, or it was too little, or too much.” By doing these calculations, and using leftover food in catering events and other meals, the dining hall’s food waste is very low.

Coming back from winter break ushered in more diversity in dining hall food. Overall, I noticed the amount of negative comments decreased while some were even replaced by more positive comments. This notable change in students’ attitudes as well as the two week separation from lunch food comments have prompted me to write a more neutral and informative piece. So what was originally intended to be a strongly opinionated article about dining hall food and students’ opinions has now turned into a call to action for all parties involved.
A few comments I continue to hear from students relate to the vegetarian and vegan options as well as second lunch. At lunch, I sit with a group of people whose dietary restrictions include vegan and vegetarian as well as gluten-free and dairy-free. I frequently hear them mentioning the amount of meat options that are provided and the lack of diversity in the vegan and vegetarian options. “Vegetarian options are sometimes limited to bell peppers which aren’t always what people want.” Says Emma Patton ’22 Providing more options than tofu and stuffed peppers would be welcomed by that group.
General feedback I’ve heard also highlights the need to have enough food during second lunch, which has been controversial since the new schedule was implemented. Making sure the lettuce and bread is stocked for second lunch remains an important priority as many students make their own salad and sandwiches.
In order to receive more feedback from the community, I ask the dining hall staff to consider restocking the suggestion board with markers. Another option is to advertise the dining hall app called Touch of Sage, available on the Apple App Store and Google Play. On this app, students who genuinely want to make a change can voice their concerns or suggestions.
For students, my call to action is this: If there is something you don’t like at lunch, consider getting in contact with the dining hall staff to voice your opinion. Speaking up is the most productive way to make change. Another option is downloading and signing in to the Sage dining app. Mr. Fernandez explains this feature saying, “you can view the menus, you can review allergens…and you can do feedback on certain dishes that you liked, some that you didn’t like. We get that going straight to our emails.” This is a great way to share your opinion on the food in a more private setting.
Finally, don’t be afraid to go talk to the dining hall staff or Mr. Fernandez directly. Feedback works! At the end of my interview, I suggested separating ingredients for the pasta that day at lunch, as it would open up more food options for people with dietary restrictions. When I walked into the dining hall, I found all of the ingredients of the pasta had been separated. I was able to eat the pasta despite my dietary restriction because the ingredients had not been combined. The thing that struck me most about this was how open Mr. Fernandez was to feedback, and how quickly it was implemented. So instead of making anonymous accounts or rude comments complaining about the lunch, go do something about it. Mr. Fernandez said it best: “Come in; talk with me. My door is always open.”