Verstappen: Champion of the World 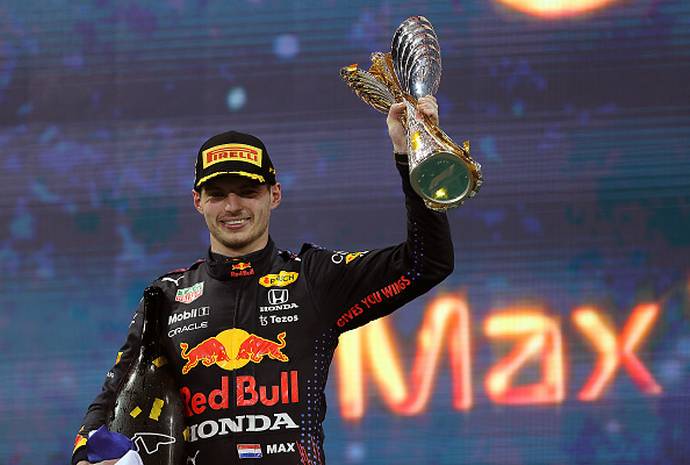 Formula One has offered many thrills over the last few decades, but none have been quite so exciting as this year. This exciting championship was intense from the very beginning. Max Verstappen and Lewis Hamilton engaged in a wheel-to-wheel battle on the last lap of the opening Bahrain Grand Prix, where Hamilton triumphed. Still, he won by less than a second. The next race, Verstappen and Hamilton went wheel-to-wheel again, where they forced each other off of the track. This time, Verstappen emerged as the winner. These battles continued on throughout this season. The two determined contenders gave it their all at every corner of every lap of every race. Occasionally, contentious incidents resulted in high tensions between the drivers and their teams, but the bottom line is that both drivers excelled and pushed the limits of their cars. When Verstappen and Hamilton entered the Abu Dhabi Grand Prix tied on points, fans knew that the championship would come down to the very end. And it certainly did: Verstappen passed Hamilton in a bold move on the final lap, winning the 2021 Formula One world championship.

The Abu Dhabi circuit was altered this year in order to make the circuit quicker and more entertaining. These changes favored Hamilton’s car; the Mercedes dominates in faster circuits with longer straights. Indeed, Hamilton’s quickest laps were a few tenths of a second faster than Verstappen during the practice sessions. Red Bull threw everything they possibly could at Mercedes with Verstappen’s teammate, Sergio Pérez, giving him a gigantic tow in qualifying (a tow is when the car in front “pulls” the car in the back-down a long straight, which helps the car in the back). This helped Verstappen defeat Hamilton in qualifying and start the Abu Dhabi Grand Prix from first place.

Tensions were extremely high before the start of the Grand Prix last Sunday. Verstappen had a nightmare of a start on the first lap due to a slow reaction time, and Hamilton surged into first place before they reached the first corner. Towards the end of the lap, Verstappen tried to make a move down the inside of Turn 9, but Hamilton was able to avoid the overtake by going off the track. The next 45 laps of the race were extremely frustrating for Verstappen. The Red Bull was simply too slow for Hamilton’s stellar pace. Verstappen fell further and further behind Hamilton each time they crossed the start line. Red Bull played the race strategically by using Pérez to slow down Hamilton for a few laps, but their car was not fast enough. With ten laps to go, the championship was hopelessly slipping away from Verstappen. Hamilton was leading by more than 10 seconds,, and he was almost certain to win his record-breaking eighth world championship title.

When speaking to the commentators as the race drew to a close, Christian Horner (Red Bull’s team principal) said that Verstappen would require a “miracle [from the] racing Gods” in order to win. And that’s exactly what happened! Nicholas Latifi crashed with only 5 laps to go, causing a safety car. All the drivers had to slow down to allow the marshals to haul the car off the track, and Hamilton’s ten-second advantage was reduced to mere tenths. The race resumed with only one lap to go, and whoever won the race would win the title. Hamilton was on an older, harder tire than Verstappen, so he was susceptible to a last-minute attack. Verstappen was able to pass Hamilton using an opportunistic move through Turn 5. Storming through the rest of the final lap, he went on to win the title by more than two seconds. Verstappen described it as an “insane” race, which effectively summarizes the whole season.

Mercedes’ team boss Toto Wolff was understandably furious about the safety car restart. Let’s not get into the controversy, though, and instead enjoy the glory of a fabulous season. You see, only one driver can win the championship. I predicted – a couple articles ago – that Hamilton would win the title, but this turned out to be wrong. It was impossibly difficult to guess the outcome, precisely because unexpected crashes and safety cars can always twist the circumstances. But I still fully believe that Verstappen earned his title. There has to be a winner and a loser in all head-to-head battles; Verstappen was the legitimate winner and Hamilton lost.

Anyhow, both drivers truly deserve to be recognized for their immense determination throughout this mesmerizing season. This rivalry has engrossed millions of fans around the world. The Verstappen-Hamilton rivalry will continue into next season. Other drivers, such as George Russell, Charles Leclerc, Lando Norris, and Sergio Pérez, might get involved in the fight for next year’s title. Hopefully, 2022 will offer even more riveting racing. See you next year!