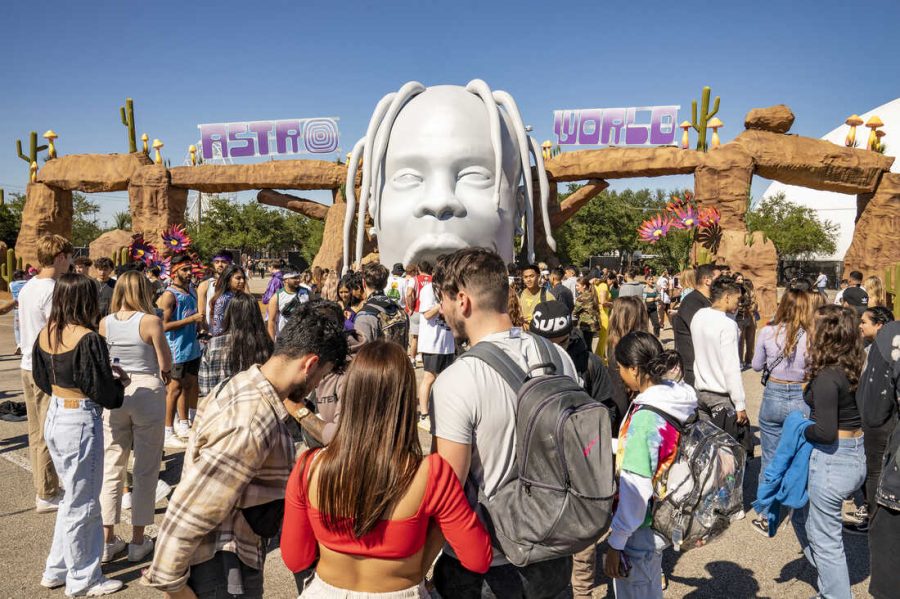 Tragedy struck in Houston Friday November 5th, leaving at least eight dead, from ages 14 to 27, and hundreds more injured, at the Astroworld music festival after a nearly unparalleled instance of a crowd gone wild. Amid the chaos and commotion of the night, it remains unclear to many what actually went down . Rumors about the causes of the tragedy range from an exceedingly overcrowded stadium to a drug fueled rage, and go as far as even blaming artist Travis Scott (during whose performance the event occurred) for inciting violence among the crowd. Among one of the most drastic instances of crowd violence in the US to date, after the event, lawsuits have come out against both Scott and Live Nation, the promoters of the festival. An ongoing investigation by local and state law enforcement has begun.
While it’s easy to imagine this as having been some sort of Titanic incident on land, with too many people and not enough resources to protect them, the tragedy may be the fault of the concertgoers themselves. In fact, around 5pm that day, reports already estimated some 5,000 unaccounted for fans pushed through ticketing lines, jumped fences, and in some cases even used bolt cutters to get through barricades. As early as noon, crowds became exceedingly out of control and local authorities on the scene were forced to shut down the merchandise area.
While Livenation and the other hosts of the event are not entirely blameless, the venue was not under-prepared— with 500 event security staff, 91 armed private security officers, and 76 Houston police officers: a drastic increase from last year. They also made the decision, after the chaos had cleared, to end the event 30 minutes ahead of schedule. Still, many attribute the tragedy of that night to inadequate response by both event staff and city officials (despite the 60 city ambulances that arrived on scene) with many witnesses and victims claiming staff were either oblivious or too overwhelmed to offer assistance to many in need. Several on-staff medics and personnel admitted that they did not understand the gravity of the situation.
While wild and unruly behavior is not uncommon for festivals, many felt that the “crowd energy” of that night was crazier and more out of hand than in the past.While this could be attributed to the people’s excitement in the return of live musical events after the almost two years of COVID-19,some speculate it was the result of drugs. This theory is further supported by the report of an officer on the scene who fell unconscious after having received a prick on the neck in the crowd. The officer was pulled from the swarm of people and had to be treated with Narcan, a substance used to reverse the effects of a narcotics overdose. While various controlled substances are common at these events, and this was clearly no exception, investigative reports have not yet attributed the madness to anything more intoxicating than the peoples own overwhelming excitement.
In addition, some have also chosen to blame Travis Scott himself. Many have criticized his message to fans, claiming he incited violence among them. Indeed Scotts own fans are known as “ragers” and he encourages them to engage in rough behaviour, such as forming moshpits, during his concerts. However, these events had not, until now, become deadly. With a childhood dream of becoming a wrestler, Scott explains that he wants his concerts to be like a WWE match. He did seem to attempt to rile the crowd during this performance by saying things like “I want to see some rages. Who want to rage?” and “make the ground shake”. While this alone may seem incriminating, Scott did in fact make several attempts during his set to calm the crowd and draw attention to emergency services .He pledged to cooperate with the investigation in any way possible.
This great tragedy is definitely one for the history books, being of the second largest scale of this type of incident in American history, beat out only by a Who concert in 1979 Cincinnati where 11 died in a crowd rush. While the true cause of the issue remains to be seen, both the hosts of the event and Travis Scott have been served with over 50 lawsuits in relation to what was almost clearly a drastic side effect of an over-energized crowd. If nothing else, this truly terrible occurrence serves as a reminder to all to remain ever vigilant as we go about our lives and stay safe as we make our slow transition back to normalcy.