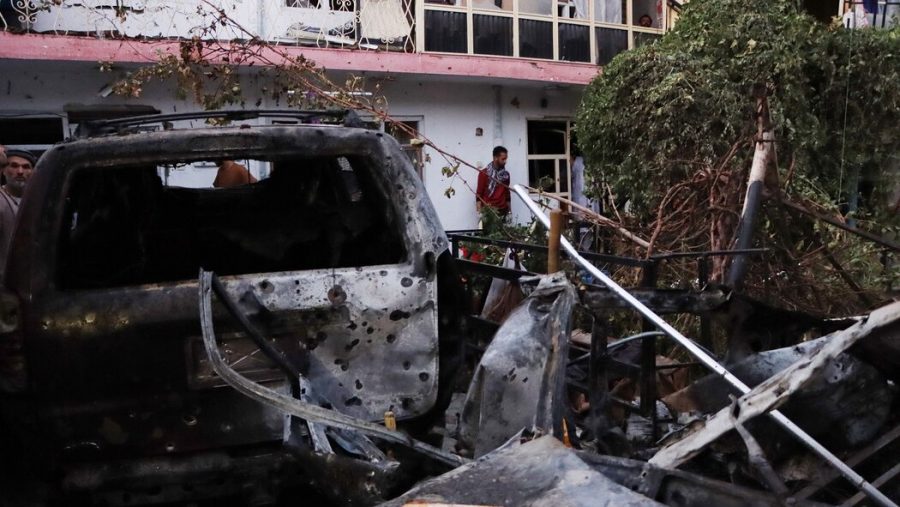 On the afternoon of August 29, 2021, a United States missile fired at a white Toyota Corolla just outside the house of Zemari Ahmadi in Kabul. The strike was believed to have destroyed an ISIS safe house. However, a recent visual investigation conducted by the New York Times suggested that the strike killed ten innocent civilians, including seven children. U.S. General Frank McKenzie has now admitted that the strike was a “terrible mistake” by the military.
A U.S. military reaper drone began following Zemari Ahmadi, an electrical engineer, on the morning of August 29. The military believed that Mr. Ahmadi’s house was actually an ISIS safe house. As Mr. Ahmadi drove to work, he made several stops to get breakfast and pick up some of his colleagues. However, the military wrongly inferred that each of his stops were strategically placed by ISIS and that Mr. Ahmadi was receiving instructions from the ISIS safe house. Mr. Ahmadi then arrived at his office with his colleagues at approximately 9:35 am. He worked for a U.S. based company, Nutrition and Education International, that tries to “eliminate malnutrition in Afghanistan.” Part of his work that day involved the distribution and transportation of food and resources to various areas in Kabul. Mr. Ahmadi’s neighborhood was one area of Kabul that was in need of water. Thus, Mr. Ahmadi filled some containers with water for his neighborhood and he loaded the containers in his car before leaving work. The U.S. military drone captured footage of him loading the containers into his car with a few colleagues at around 3:38 pm. Officials thought that these water jugs were, in fact, explosives. Then, Mr. Ahmadi drove back towards his house, which was quite close to the Kabul airport. At this point, the military was convinced that Mr. Ahmadi was an extremely dangerous man working for ISIS and they feared that he would be a threat to the U.S. troops at the airport. At 4:50, while Mr. Ahmadi was driving into the courtyard of his house, a military commander decided to launch a missile at his Toyota Corolla. His children and his brother’s children were running into the courtyard to greet him, but they never got to say hello. Before Mr. Ahmadi could even park the car, the strike killed him, his cousin, three of his children, Zamir, Faisal, and Farzad, three of his brother Romal’s children, Arwin, Benyamin, and Kayat, and two three-year-olds, Malika and Somaya.
Mr. Ahmadi had applied to settle in the United States as a refugee. He saw hope and opportunity in our country, but he was killed by our military before he could even move to the U.S.The military did not admit their error for several days, insisting that the strike was justified. Military members defended their actions by citing a larger explosion that was believed to be a retaliation, yet this explosion did not actually occur. The Pentagon and the Secretary of Defense have since acknowledged that the strike was a mistake. Nevertheless, Mr. Ahmadi’s family members, especially his brother Romal, are still seeking justice.
This devastating error was believed to be the final U.S. strike fired in Afghanistan. This strike characterizes much of the United States military operation and public opinion of the war in Afghanistan – uncertain, mistaken, devastating, traumatic, and causing far too many unnecessary deaths.
​​