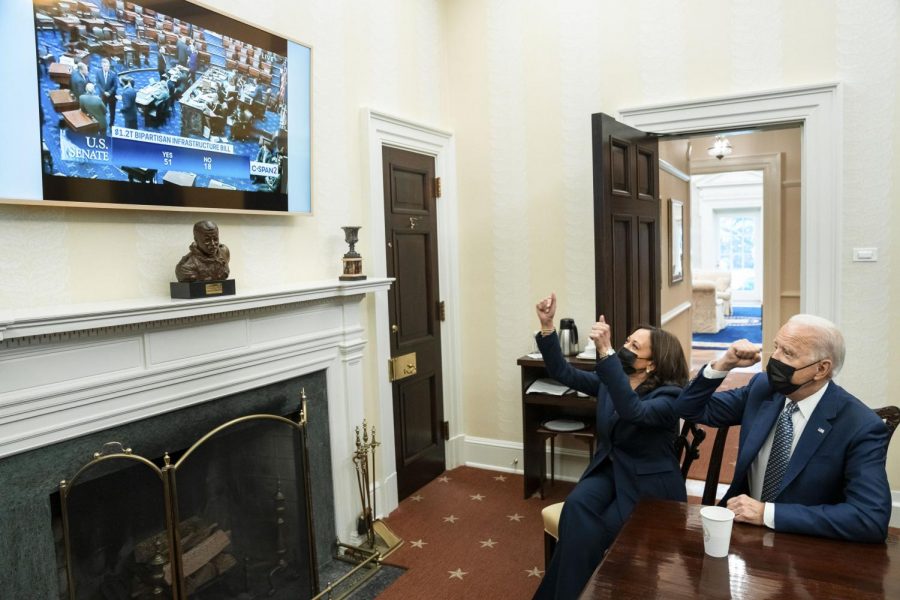 President Biden and Vice President Harris watch in excitement as the Senate passes the bipartisan infrastructure bill on August 10, 2021.

Congress is currently working on drafting President Biden’s 3.5 trillion dollar social spending plan, after it passed its blueprint, and the Senate passed its counterpart, a 1.2 trillion dollar Infrastructure Plan, last month. Hurdles to passage remain plentiful as moderates and progressives in the Democratic party continue their disputes about what belongs in the bill and how much is too much to include.

Moderates, like Sen. Joe Manchin of West Virginia, Chairman of the Energy committee, remain the most apparent obstacle to the passage of the larger package. Earlier this month, the Senator said that Democrats should “pause” their work on the mammoth bill and focus on other fiscal issues. However, he still remains committed to passing a scaled-down version of the bill and has been very adamant on his support of the bipartisan infrastructure package. As for the bipartisan package, it too may be in trouble because of Sen. Manchin- Progressives in Congress like Rep. Alexandria Ocasio-Cortez of New York and Sen. Bernie Sanders, chairman of the Senate budget committee, released statements soon after Manchin made his comments with a clear message. They stated that there will be no bipartisan infrastructure bill without a substantial bill with a slew of Democratic priorities, including climate action, health care, immigration reform, education, childcare expansion, and much more. Sanders recently finished a swing around the Midwestern United States where he held several events touting the 3.5 trillion-dollar budget blueprint that passed both houses of Congress last month.

As these factional inter-party fights unfold, Congressional leadership is approaching its most daunting test yet – to unify the Democratic party and deliver one of the most substantial pieces of legislation in American history to the President’s desk. Senate majority leader Chuck Schumer of New York and House Speaker Nancy Pelosi of California have already faced and defeated such challenges in the past, like when they delivered all but one Democratic congressional vote in Congress to pass the landmark 1.9 trillion dollar COVID-19 relief package earlier this year. However, the stakes are even higher politically this time around, as the Biden administration’s legacy could well be at stake. President Biden has shown that he understands this well, as he, Vice President Kamala Harris, First Lady Dr. Jill Biden, and members of his Cabinet like Transportation Secretary Pete Buttigieg and Secretary of State Anthony Blinken have traveled extensively across the nation to relentlessly advertise the plans. Amidst the events in Afghanistan and the resurgence of the coronavirus pandemic with the spread of the Delta variant, the President is no doubt hungry for a history-making and legacy-defining win. It will soon be seen if his party can deliver it for him as work heats up on the Hill, and as ominous deadlines approach later this month.

The larger of the two packages, or “soft” infrastructure package at the moment contains around 3.5 trillion dollars for issues such as health coverage expansion, environmental policy, and immigration reform. On the other hand, the smaller of the two packages, or the “hard” infrastructure package, contains around 1.2 trillion dollars for needs such as roads, bridges, highways and manufacturing. These packages would transform the American government and how it serves its people on the largest scale since the 1960s, or perhaps even the 1930s, if enough can survive the debate over the bill and make it into law.