Out on the Street! 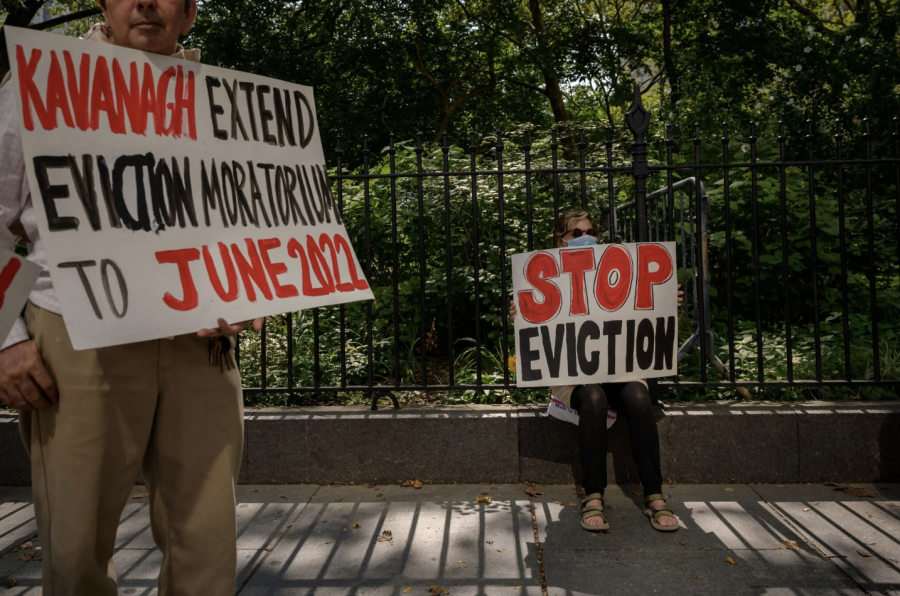 Protesters asking for an extension of the eviction moratorium, a request denied by SCOTUS

On Thursday, August 26 the Supreme Court voted 6-3 to end the August 2021 Federal Eviction Moratorium, which was put in place to prevent evictions during the pandemic. The end to the moratorium takes effect immediately, although implementation will take longer due to a backlog of eviction cases in state courts. Nevertheless, the end of the moratorium puts renters across the country in danger of losing their homes while the dispersal of federal rental aid moves slowly.
The August moratorium struck down by the court was the extension of an earlier moratorium. The Biden administration issued the August extension, despite an earlier warning from the Supreme Court, to keep renters in their homes long enough for renter aid to be distributed. The Emergency Rental Assistance Program was established in March as part of the CARES Act pandemic relief package. The idea was that money from the program would pay renter’s debts, eliminating the need for a moratorium. However, the allotted $46 billion is being given out at a trickle, with only $1.7 billion distributed as of August 25.
The Federal Eviction Moratorium was first put into place in September 2020 by the Center for Disease Control (CDC). The CDC can issue eviction moratoriums when eviction poses a threat to public health. The concern was that evictions during a pandemic would cause overcrowding and increased transmission rates. Landlords challenged the original order in court, saying that, in issuing the moratorium, the CDC had overextended its reach. The issue wound its way through the court system until it reached the Supreme Court, where the original moratorium was upheld in a 5-4 Supreme Court ruling on June 29, 2021. Though the September 2020 moratorium was upheld, the four dissenting justices made it clear that for the moratorium to continue past its expiration date of July 31, 2021, it would need congressional authorization. When Congress failed to act before July 31, the decision of whether or not to extend the moratorium fell to the Biden administration in the midst of the rising Delta variant cases. The administration issued a new moratorium on August 3, which has now been struck down by the most recent Supreme Court ruling on the grounds that the CDC cannot issue such an order.
On a local level, renters in New Mexico do not have to worry about the change to the federal eviction ban. For most of the pandemic, New Mexico has had its own eviction moratorium established by the state supreme court that is not supposed to end until 46 million dollars of the state’s allotted federal renter aid is distributed. State officials aim to reach this goal by September 31. As of July 19 only 3 million dollars have been dispensed. New Mexicans will still be protected by state law if the national eviction moratorium does not gain congressional support, but it is crucial here and across the country to administer federal renter aid without delay. If not, the eviction of families who can’t pay their rent will put thousands on the streets during a public health crisis.