Since the beginning of the pandemic last year, online shopping has gained lots of traction due to people’s inability to leave their homes for a portion of the year. Even though there is now light at the end of the tunnel, online fast fashion brands are still a hit. 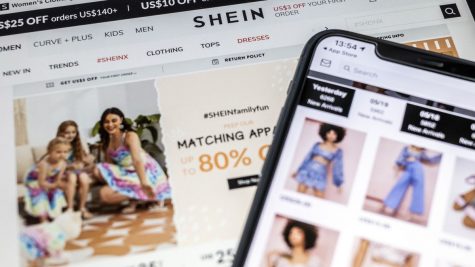 questionably low prices. American influencer Khloé Kardashian has recently received hate after partnering with Shein, due to backlash from individuals who are against the company’s unethical and unsustainable production methods. “Shein operates under a fast fashion business model, a method that is known for its unethical and unsustainable practices that are responsible for 10% of carbon emissions worldwide and take advantage of garment workers who are subjected to poor working conditions,” states Kaitlin Mahar for Parade.

However, this is not the first brand to be deemed fast fashion. Forever 21, H&M and Fashion Nova all offer a vast assortment of very affordable and trendy products that are popular among Gen Z. Brands like these manufacture cheap, poor quality clothing that directly follow current trends to draw in customers to regularly spend large amounts of money. Because the quality of the clothes is lacking, garments from these brands do not last which ensures that customers return to spend more money when their clothes start to deteriorate.

These brands also replicate products from high-fashion brands and market them at sometimes a 90% cheaper price. According to an article by Insider, “the original idea was simple: make runway fashion cheap, and available as soon as possible.”

The fashion industry is already one of the largest private sectors in not only America, but around the globe. High fashion isn’t as big of a problem as fast fashion, given the selective styles, expensive prices and quality materials, but nevertheless still adds to the everlasting effects the fashion industry is having on the planet.

According to EuroNews, “Shein now represents almost a third (28 percent) of the fast-fashion market in the US alone,” and given that “the fashion industry is the second biggest polluter in the world,” you can see how the growing popularity of sites like Shein is becoming a huge problem. The company releases 700-1000 new items every day, and although they release small numbers of each item, about 50-100 of each, the numbers add up and the company states to produce on average 35,000-100,000 items per day.

This business model is anything but sustainable, contributing to global carbon    emissions and waste that comes from unused materials that are just thrown away. While this seems bad enough, like many other fast fashion brands, Shein has been criticized for its unethical working conditions. Although the website states to abide by child labor laws, Shein’s lack of transparency poses questions as to whether they really are upholding that promise. Due to the magnitude of products made and the prices for which they are sold, liveable wages do not seem within the budget of these fast fashion companies. It is simply easier and cheaper to have children working since they are not paid and can be seen as easier to manage and control.

Although it’s tempting to support these brands and their cheap and trendy styles, there are always other options despite a slightly higher price. Consider brands such as Levi’s, Patagonia and UNIQLO, which offer a fantastic selection of quality clothing as guarantee a pledge to ethically supply and manufacture their products. Patagonia aims “to be carbon neutral by 2025, source 100% of their energy from renewable energies, and increase their percentage of recycled material” and has continued to donate 1% of yearly revenue to environmental non-profits for the benefit of the planet, according to Climate Conscious. UNIQLO follows the Responsible Down Standard (RDS) when sourcing feathers for down jackets and has pledged to be cruelty free. Levi’s has been part of the Better Cotton Initiative which reduces water consumption and follows ethical sourcing. Levi’s uses their platform to advocate for change and reduce their carbon footprint and impact on the planet. By supporting brands like these, there is a future of sustainability and for those who love fashion.