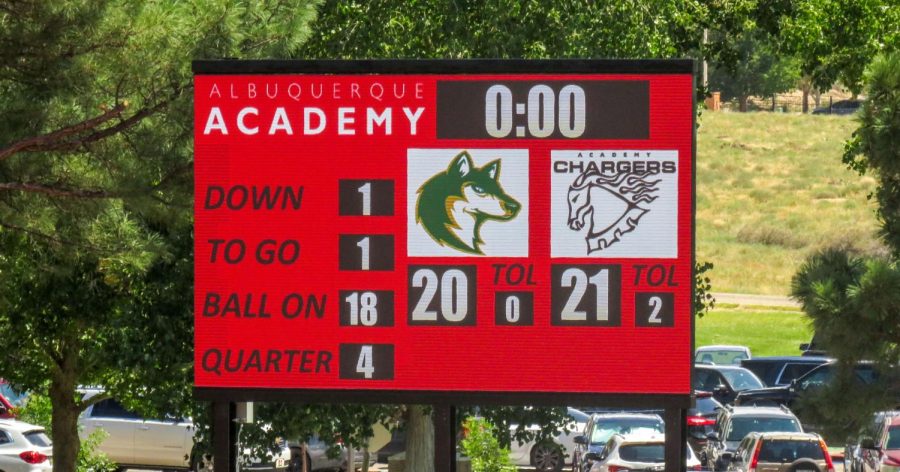 The scoreboard shows the score, but the story is one of hard work and dedication.

The Albuquerque Academy Chargers won their 3rd football game in a row! With a strong team effort, Academy beat Hope Christian 21-20 last Saturday, at Richard Harper stadium. The first game of the year to go the full 48 minutes offered a definite challenge from Hope’s strong team, but the Chargers pushed through with perseverance and confidence.
With two minutes and 48 seconds left in the 3rd quarter, a crucial tackle gave Academy their confidence to finish strong. Brody Whitaker ‘24, a defensive lineman, comments on his joint tackle with Jon Davis ‘22, defensive lineman, on the Hope Christian quarterback, saying, “It was a team effort. We worked together as one unit.” It was a great game for many of the players, in particular Cole Conway ’23, (#25). Conway, a junior, scored the first touchdown of the game and had multiple receptions. “The team really held together,” he mentioned towards the end of the game. AJ Rivera ’23 (#9), our offensive Quarterback and one of the team captains believes “we will keep getting better and better… We have a high ceiling so there is a lot of room to grow.”
In addition to the excellent offense the team’s defense was strong and powerful. Clark Hager ‘22, another lineman added “the team had a great defensive game and the offense really came together.” Starting kicker Ryan Smidt ‘24 went 3 for 3 on extra points, and his consistency proved to be the difference. Academy’s head coach, Coach Gehres, appreciated the team’s dedication and improvement from recent games. He said the team has “a lot of composure and responded very well, they also handled the game mentally as well as physically.”

Overall, Academy held strong and has a bright future for the rest of the season. The sense of community is strong with this team and never fails when put to the testThe next game for the undefeated Chargers is on the road against one of the top teams in our bracket: The Bloomfield Bobcats on Friday at 7pm. Coach Gehres acknowledges that “it will be a great challenge,” but believes the team can persevere with their strong dynamic. Though they are on the road, fans can join the stream online and cheer on your players from home, as they try to remain undefeated. On behalf of the friends,and family who come to support our Chargers, we appreciate the hard work that they are putting in to keep an undefeated season! GO CHARGERS GO!