Does the Duke City need a new stadium? 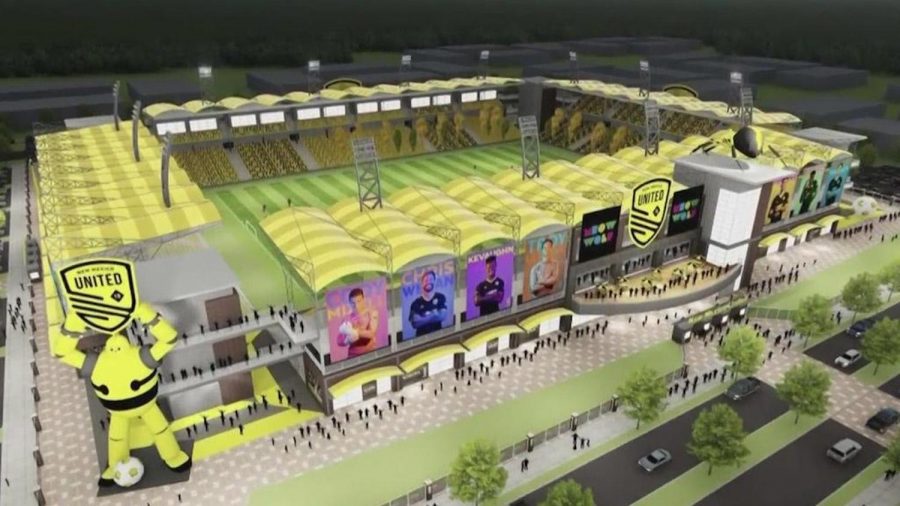 Artist conception of a possible new stadium for NM United.

Albuquerque Mayor Tim Keller and New Mexico United owner and president, Peter Trevisani, made an announcement to fans before the El Paso Locomotive game near the end of July. “You all have earned a stadium!” shouted Mayor Keller to fans at the tailgate announcement. The news was a step forward toward a new home arena for NM United: a bond issue proposed at the Albuquerque City Council meeting on August 2nd to fund a new multi-purpose stadium project. The plan included several possible locations for a new stadium, including one at the Train Yards, one at Coal and Broadway, and one at Second and Iron. The projected cost for a stadium is anywhere between $65 and $85 million for an area expected to seat 10,000 to 12,000 occupants.
The current stadium situation is not ideal for United. The team plays at Isotopes Park, nicknamed “The Lab” by United fans, the home of the Albuquerque Isotopes and now also the home of United. For each United match, a synthetic turf is placed on top of the baseball diamond to craft a makeshift soccer pitch. The field is situated so that the southwest corner of the pitch is near where the batting square would be, and the northeast corner of the pitch is near the north side of the grass seating area. Because the stadium is designed for baseball and not for a soccer pitch, the seating is not optimized for viewing.

In the weeks and months prior to the announcement, a board reviewed and audited several locations for a new stadium in conjunction with CAA Icon, a consulting firm in Albuquerque. The report provided information about the cost, functionality, capacity, and other factors important to planning a new stadium. Three locations came out as the top options for the club, with two “preferred” options, but all present their own issues. Every location reviewed was in or near to the Downtown Albuquerque area because, according to Trevisani, all the players already live downtown, so it is the best place for the team.
The first location proposed is directly south of the two main buildings at the Rail Yards. The Rail Yards location has several advantages and disadvantages. The largest benefit to the Rail Yards site is that the site is owned by the city, meaning United would not have to negotiate with private property owners while developing the stadium. The largest setback to the location is that there are historical buildings and items on and around the site. Notably, there is a historical railroad turntable, something that would be used to redirect trains and train cars, located on-site that would either have to be removed or demolished.
The two preferred locations are both nearby the Rail Yards, one at Coal and Broadway, and the other at Second and Iron. While these options fulfill the club’s vision best, there is a large issue with each. They both would require private businesses to relocate, presenting issues as some if not most property owners are not interested in relocating for a stadium.
The report estimates that a stadium would cost between $65 and $85 million and should seat between 10,000 and 12,000 occupants, with an option to expand to seat up to 15,000 occupants. It also estimates that a stadium could bring in up to $384 million in tax revenue, merchandise, ticket sales, and more over the next thirty years. Other options for the stadium were proposed, including adding a beer garden or an amphitheater, and the city stated that the stadium could also be used as a location for worship events, live performances, and a women’s soccer team. The project has started and is expected to continue to go through an input process, allowing the community to voice their concerns, suggestions, and/or questions.
Considering the cost and challenges with each location, there has been mixed reception to the project. However, according to a poll conducted by Research and Polling Inc. in January this year, support for a new stadium comes at a ratio of almost three-to-one. New Mexico United also has some of the highest attendance rates in the United Soccer League (USL). In 2019, the team’s average attendance rate (12,693) out-paced every other team. This season, its attendance rates are second only to Louisville City FC, which opened a new home stadium of their own last year. Jacob Anderson 25’ said, “United needs their own stadium because the facilities are different for soccer than for baseball and… when they play on the turf rather than the regular field, it switches them up a bit. Also… soccer stadiums don’t usually only have two sides of fans, so having all four sides will help with the fan base and make home games even crazier.”
Opposition to a new United home venue comes in a few different forms. For those living downtown, the preferred locations at Coal and Broadway and Second and Iron do not seem appealing. As mentioned, businesses in the planned stadium sites have already voiced their opposition to being displaced and relocated. Residents in the area also do not look forward to the increased foot traffic, congestion, and trash that would likely come from a stadium in the area and have the same relocation worries that businesses have voiced. Some of the residents in downtown Albuquerque support a new stadium but would rather other potential locations be considered.
City payment for the stadium also brought concern from community members. The bond issue first proposed to the Albuquerque City Council on August 2nd passed 7-2 on August 16th. This means that a $50 million tax revenue bond resolution, added on to the $8 million already raised by New Mexico United, will go to Albuquerque voters on November 2nd. While, given the nature of this bond proposal, the city states that taxes will not be raised on citizens nor will money be taken from other projects, a common form of opposition from community members remains that the $50 million going towards the stadium could be used toward a better purpose, such as social services. This is especially so considering the impact Covid-19 has had on the city and the Delta variant surge.
New Mexico United may or may not get a new stadium at this point, but Trevisani and New Mexico United are nonetheless eager to have the opportunity to set up a new home for the team. November’s ballot will reveal New Mexico’s feelings about the plan, but, until then, the team will continue to rally support and listen to the community; the debate about building a new stadium versus seeing United stay at Isotopes Park may still rage on.