New Mexicans at the 2020 Tokyo Olympics 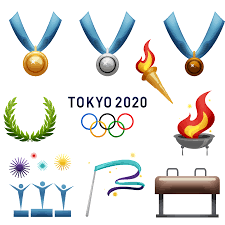 The United States is in its most patriotic state during the Olympics. We all sit on our couches and watch Caeleb Dressel and Katie Ledecky dominate in the pool, and then change the channel to admire the women’s gymnastics team as they flip in the air with incredible precision. We cheer for the successes of our athletes as if we have watched them throughout their entire careers. Tokyo 2020 was no exception. The postponed Olympic Games were a little different this year, for there were no fans hollering from the stands, and masks were worn throughout the stadiums, but the same joy could be felt across the globe. It was the joy of coming together as a country and seeing American athletes up on the podium, get gold, silver, and bronze medals draped around their necks. They were given an additional challenge this year with no crowd noise to give them that extra boost of adrenaline, but everyone made our country proud.
While most viewers know high-profile athletes like Simone Biles, fewer are aware that 16 athletes with ties to New Mexico also competed for the US and eight other countries. These athletes competed in nine different sports, ranging from skateboarding to softball, to track and field. This article presents six of the most notable athletes from New Mexico.

Anika Apostalon ’13, perhaps the most recognizable of the New Mexican athletes on our campus, went to the Albuquerque Academy! Graduating in 2013, Apostalon went on to qualify for the Czech national team in swimming and competed this year for the Czech Republic in the Women’s 400 Free Relay. Apostalon anchored the relay and the team ended up placing 14th overall.

Mariah Duran, a New Mexico native, was named to the inaugural USA Skateboarding team this year and competed for the United States at the highest level of her sport in the Olympics. The Manzano High School graduate placed 13th in the preliminary rounds, competing in the women’s street event.

Andrea Howard, a softball player who competed with Team Italy, is a graduate of both La Cueva High School and The University of New Mexico. Even though the Italian softball team did not win any games in Tokyo, she competed in all five games!

Representing UNM’s golf program, Manon de Roey and Jodi Ewart Shadoff competed in Tokyo on behalf of Belgium and Great Britain, respectively. Unfortunately, neither made the top 66 and were unable to advance to the final round.

Finally, one UNM alum won bronze in Tokyo this year! Josh Kerr, who competed for Great Britain, clinched the bronze medal in the 1500 meter race, narrowly missing out on the silver medal.

Each of these athletes has worked incredibly hard to get to where they are now and the Tokyo Olympics was a special stop on each of their journeys. As of right now, each athlete mentioned above is still competing and we hope to see all of them and more New Mexicans in Paris for the 2024 summer games!