What's next for the future of Academy's Esports program? 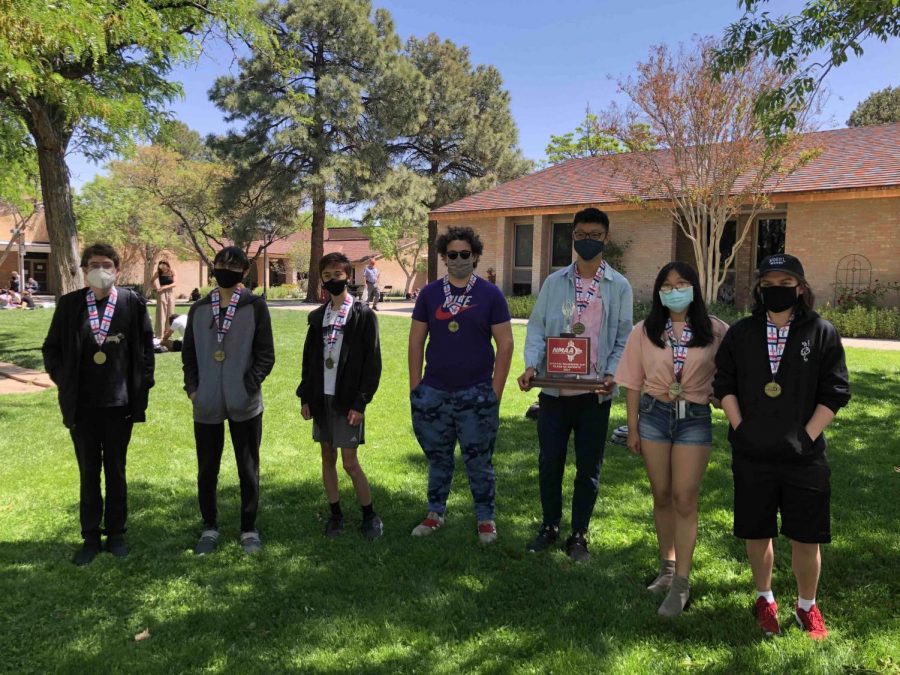 On April 30th, the Albuquerque Academy League of Legends Esports team triumphed over Los Alamos and received the 4A NMAA state title. This was Academy’s first year at the competition, which made their accomplishment even more notable. The team was initiated in quarantine by Jennifer Alford and Andres Lucero ‘15 and boasts an impressive line-up.
The Esports team began as a fun activity where students could play and connect during quarantine, but it quickly became an activity in which students could play competitively. All of the practices and competitions during COVID for the Esports team have been done from the comforts of players’ homes.
The New Mexico Activities Association’s (NMAA) Esports program is fairly new, beginning in 2018. Now, in 2021 the popularity of Esports has increased, with 59 schools now participating in New Mexico, and is expected to continue growing. As of now, there are only two computer-based multi-player games NMAA endorses: League of Legends and Rocket League. Rocket League is soccer with vehicles and the objective is to get the ball into the opposing team’s goal and prevent them from scoring. In League of Legends, two five-player teams battle each other, and the objective is to find and destroy the enemy team’s base.
In the future, the Esports team would like to expand the variety of games they play and lean towards more competitive games such as NBA, which is online basketball, Overwatch, which is a first-person shooter game, and Splatoon, where the goal is to splash paint around the city and opposing teams.
Both Alford and William Yun ’23, a gamer on the varsity team, agree that Esports are sports as they require problem-solving skills, reaction time, strategy, teamwork, and sportsmanship, just the same as soccer or football would. In response to those who say that Esports are not real sports, William Yun said, “It’s understandable, I mean I get what they’re saying but at the same time, it’s still a sport since it requires hard work and practice.” When asked what his hopes for the future of the Academy Esports team, Yun stated, “I’m hoping that it will get bigger since this year we had a small group. We’re hoping it will be known more as a sport and less as an afterschool club.” While discussing the next step for Academy’s Esports team, Ms. Alford stated, “We need to establish an on-campus computer lab where kids can play.”
If you are interested in joining, Yun says, “Come and have fun, play with your friends. It will be like an afternoon gaming session.” Anyone in grades 9-12 is welcome to join the team in the preseason and during the fall season next school year, hopefully continuing the team’s recent success.