Social Media struggles with how both protect privacy and maintain profits. 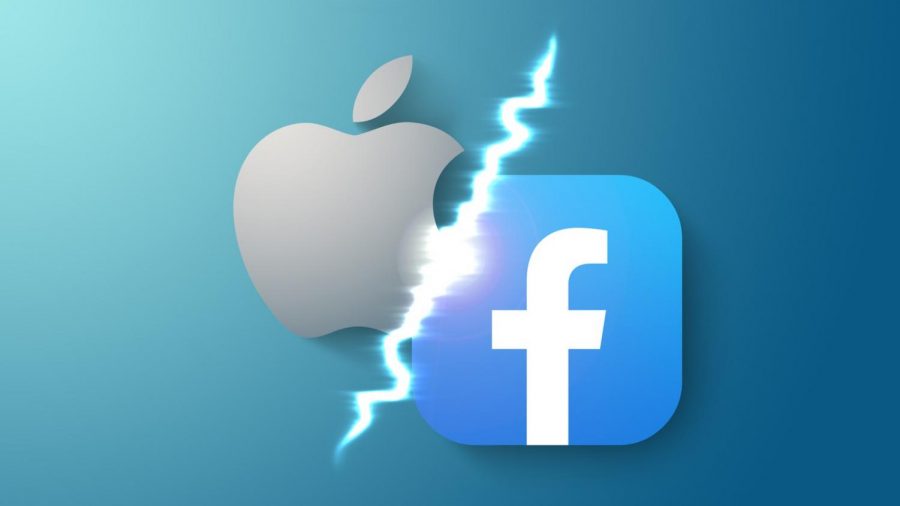 Apple and Facebook are engaging in a war regarding a new privacy policy that Apple is revealing in their most recent iOS update for iPhones and iPads. The policy is designed to let Apple users decide whether or not their activity is tracked by app-developers across the internet and other apps. The new feature is championed by Apple as App Tracking Transparency, and it is causing uproar for Facebook, which has concerns that this new feature could harm their revenue, which comes largely from targeted advertisements.
The social media giant has launched several counter-attacks to Apple’s plan. A national full-page newspaper ad appeared in the Wall Street Journal, New York Times, and Washington Post, targeting the privacy changes. Facebook also launched a website where small businesses could outline why targeted ads are helpful for them. The website includes videos from business-owners talking about how social media ads are important for attracting more customers. Apple CEO, Tim Cook, shot down the idea that Apple’s altered privacy policy could harm small businesses in an interview with the New York Times in early April, stating, “We know these things are flimsy arguments. I think that you can do digital advertising and make money from digital advertising without tracking people when they don’t know they’re being tracked.”
Facebook has also attacked the move from Apple as a competitive venture more than an ethical battle. Facebook CEO, Mark Zuckerberg, said that he sees Apple as a competitor, stating that Apple’s iMessage app clashes with Facebook’s messaging feature, Messenger, and, also Facebook-owned, WhatsApp. The captain of Facebook’s ad business, Dan Levy, added that the privacy change is more about profit than privacy. He stated that, by giving users the ability to opt out of targeted ads, it would add pressure on app-developers to move from targeted ads to in-app purchases and subscription services. These alternate methods of gaining revenue are taxed by Apple, which gets 15% for small businesses and 30% for larger companies and app-developers.
Apple defends its actions by saying they are providing more privacy for its users. Its App Tracking Transparency plays into an on-going message to its users, offering a higher sense of privacy for those who use their devices. Apple says it is seeking to give users more control over how their data is shared. Apple CEO Cook, in a speech he gave in March, said, “If a business is built on misleading users, on data exploitation, on choices that are no choices at all, it does not deserve our praise. It deserves reform.”
But are Apple’s privacy changes actually beneficial to users? What will it mean for people who choose to opt out of targeted ads? For those who decide to bypass targeted ads, it will likely just mean the advertisements that pop up will be less relevant. The change will simply make it easier, just the press of a button, to opt out of getting tracked by apps across the internet and other apps.
According to the Harvard Business Review, many of Facebook’s findings on how the change would impact small businesses are misleading. It is more likely that the impact on small businesses would be moderate and not as aggressive as Facebook’s ad campaigns make out. However, Facebook’s concerns about decreased ad revenue from the change are shared by similar social media apps such as Twitter and Snapchat. These social media apps, while either indifferent or even supporting Apple in their privacy decision, commented that the change could cause disruptions and have hinted at the harmful effects the policy could bring in their near future.