Another Look at US Foreign Policy in Latin America 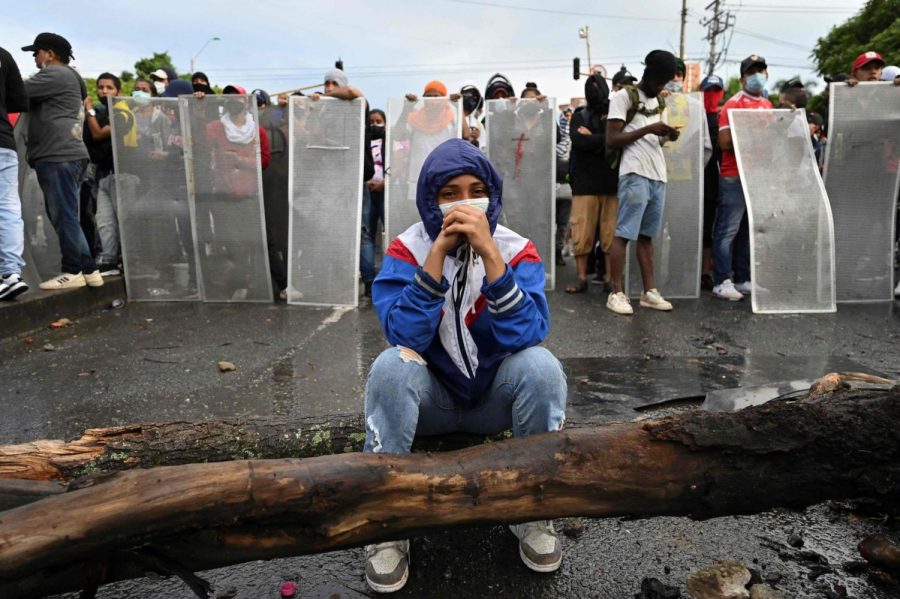 A protestor sits as demonstrators stand behind makeshift shields during clashes with riot police officers in Cali, Colombia

“Duque Ciao, Duque Ciao… me he encontrado con el invasor.” Goodbye, Duque, Goodbye, Duque… I have found the invader. This song, which still rings through the streets of Bogotá after three weeks, articulates the fury of Colombian protestors calling for conservative President Iván Duque’s resignation. The voices decrying political violence face the point of the government’s corrupt sword. As Colombia’s police intimidate and kill peaceful demonstrators, America must come to terms with its role in foreign brutality.
Protests initially centered around opposition to a new tax bill, but they soon became a catalyst for much bigger issues. President Duque claimed the tax bill, which raises taxes primarily on middle and working-class Colombians, would help revitalize the nation’s healthcare system. However, amid skyrocketing unemployment, the move outraged struggling citizens. Fransisco Maltes, president of the Central Union of Workers and left-wing figure, wrote on Facebook that the reform would “plunder the pockets of (ordinary) Colombians, while not touching even a hair of the super-rich,” and protestors agreed. Duque didn’t. In an attempt to quell the backlash, he deployed police, who pepper-sprayed and beat demonstrators. Stoked by state violence, the movement exploded into an all-out war between the people and the government. Security forces have killed over 42 people. Amidst the chaos, Duque withdrew the bill, but it was too late. Protestors, emboldened by global working-class solidarity and sick of their treatment in the status quo, reshaped their demands and kept marching. Now, their chants called for universal basic income and free public university and denounced efforts to privatize healthcare. At this, Duque sent in the National Guard, who shot both rubber and steel bullets at their own people. According to videos uploaded on social media, these moves backfired, only escalating the conflict.
Many observers compare that dynamic to the Black Lives Matter protests that took place in the summer of 2020. Images of makeshift plastic shields held up against police in military-grade armor seem familiar, as does the leadership’s rejection of systemic issues. When President Trump visited Wisconsin after a policeman shot Jacob Blake, he denied the existence of racism in law enforcement, a claim that flies in the face of empirical data. Likewise, Duque remarked in an interview that “just saying that there could be any possibility that the Colombian police will be seen as a systematic abuser of human rights — well, that will be not only unfair, unjust but without any base.” It is difficult to accept Duque’s sentiments when Colombia holds far more political prisoners than most countries. Additionally, the Columbian justice system tries police officers for violations in military courts instead of criminal ones, which protects repeated abusers from accountability. The militarization of Colombia’s police force stems directly from lengthy American interference. Highlights of US military intervention in the 1900s include massacring Colombian workers, bombing peaceful communities with Napalm, and supporting right-wing militia groups. Plan Colombia, conceived under President Bill Clinton, served as the basis for current U.S. operations in the country. Inspired by Richard Nixon’s War on Drugs, it sought to decrease the production and distribution of cocaine in the nation. However, Clinton’s officials rejected the advice of economists and medical experts who reported that funding drug treatment centers would be the cheapest and most effective solution. Instead, the U.S. began a campaign of paramilitary action, training Colombian police forces and spending hundreds of millions of dollars a year on high-grade military equipment for their security forces.
Not only did the drug trade in Colombia actually grow under Plan Colombia, so did the violence. The Colombian government formed lasting relationships with right-wing death squads, an alliance that targeted not only terrorist groups, but innocent people. From 2006-2008, the Colombian military killed over 10,000 of their own citizens, who they pretended were left-wing insurgents, to prove that US aid was working and strengthen their requests for more. Most of the weapons used to kill those citizens were US-made. Despite the staggering death toll, American assistance to the country only grew. In 2020, the American government spent 448 million dollars of taxpayer money on Colombian military equipment. The U.S. also continued to train security forces who walk free after committing human rights violations – the same forces who murder protestors today.
On May 15, 2021, 55 members of the House of Representatives called on Secretary of State Anthony Blinken to suspend all funds to Colombia’s National Police, a small but necessary step towards a more humane foreign policy. Regardless of whether the Colombian people succeed in any of their demands, similar advocacy must prevail. American-backed police killed innocents long before Iván Duque. Unless we echo the chants of global protestors and confront our own government, they will continue killing long after he leaves.