The ultra-rich have hoarded so much capital and worth that millions are now suffering as a result.

Rapper Lil Uzi Vert took conspicuous consumption to new heights when he paid $24 million dollars to implant a rose diamond into his forehead. Like many in the hip-hop industry, Lil Uzi Vert was never one to be humble of his winnings. He owns multiple lavish pieces of jewelry, sports cars, watches, and much more. Lil Uzi, who was born in Francisville, PA, a town suffering from crime and poverty, has chosen to neglect his roots and the less fortunate to flaunt his wealth. The ultra-rich have never been concerned with the well-being of others, and their presence in society is more harmful than it is beneficial.

Symere Bysil Woods, also known by his stage name, Lil Uzi Vert, is one of the most prolific hip-hop artists in 2021. Lil Uzi’s “XO Tour Lif3” debuted at number one on the Billboard 200 and is certified double platinum. Lil Uzi Vert was nominated for Best New Artist at the Grammy’s in 2018. With fame, Lil Uzi Vert has also accumulated an enormous amount of capital with some estimating his net worth as high as $16 million. 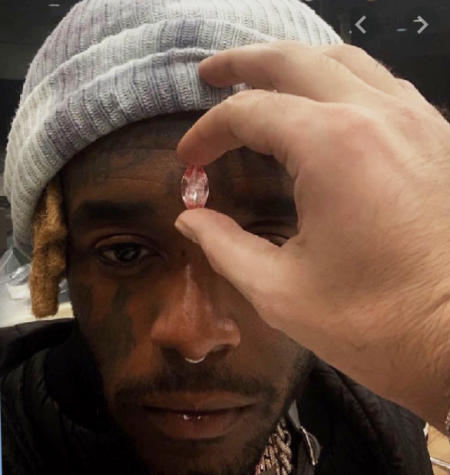 Lil Uzi recently announced that it took him four years to pay off the diamond implant. This isn’t just any extravagant purchase though. Lil Uzi Vert implanted a symbol of elitism and a lack of class consciousness into his forehead. While outlandish jewelry may be essential to rap culture, a failure to recognize insensitivity is not. Lil Uzi Vert was able to lift himself out of poverty and into stardom. He is allowed to make lavish purchases. However, there is no excuse to be making lavish purchases of this caliber when so many in his community, and many others, are struggling day today.

Lil Uzi Vert is by no means the only selfish wealthy person. Hip Hop artists and professional athletes are known for flaunting their wealth. Beyond them, CEOs such as Elon Musk and Tim Cook have so much capital that they wouldn’t be able to expend it even if they wanted to do so. While many do donate to charity consistently, including Lil Uzi Vert himself, author Anand Giridharadas shows in his book, Winners Take All: The Elite Charade of Changing the World, that the ultra-rich tend to donate to charity for tax cuts, where they end up saving more than they donated, or for their public appearance. Regardless, donating to charity means very little if you have superfluous money that you continue to hoard. Why should anyone have more money than they could ever need, especially if there are so many who don’t have enough? Lil Uzi Vert, Jeff Bezos, Warren Buffet, and many others are examples of glitches in the capitalist system. These glitches are costing tears, futures, and lives.

America uses pro-capitalist teachings in schools and society to brainwash us into believing that those who don’t work should be left to die and those who do are the “great American success stories.” Regardless of how much someone may or may not have contributed to society, they should in no circumstance be neglected and left to suffer. How can we as human beings spend such large sums of money on frivolous products when we are fully aware that so many around us are struggling to feed their children every night?

Lil Uzi Vert is one of America’s great social mobility stories. In a society that limits black excellence, Lil Uzi Vert has thrust himself to the top of the social ladder through his talent and hard work. He is of course allowed to celebrate that by consuming products that he previously couldn’t even fathom. He worked for his money and has earned the right to treat himself every now and then. However, we as human beings have a responsibility to one another, all else aside. I have no problem with Lil Uzi Vert participating in conspicuous consumption. $24 million dollars, however, could uplift entire communities. It could feed thousands of children for decades. It could give those oppressed by the system an extra leg to stand on. It could save lives. No one has worked so hard that they have earned the right to be selfish. The ultra-rich have hoarded so much capital and worth that millions are now suffering as a result. Until everyone in America can say that they can afford to eat tonight, no one should have more money than they know what to do with.