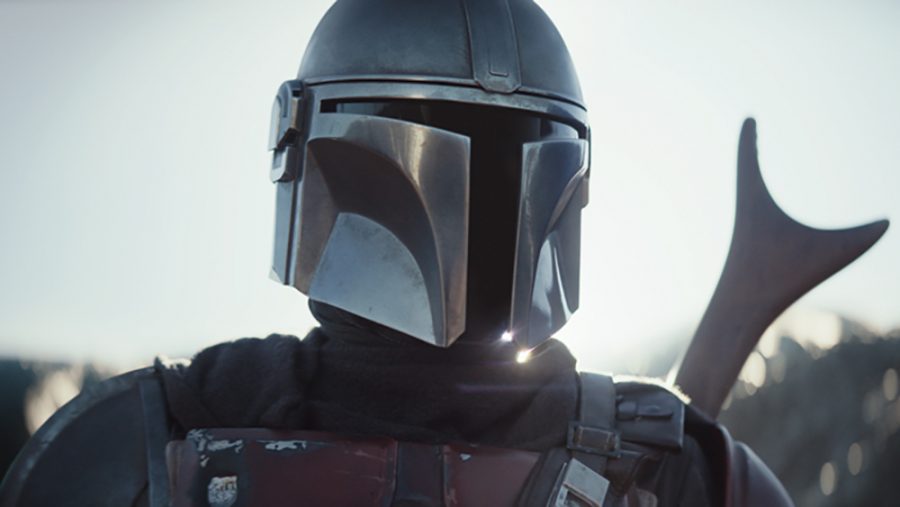 Pedro Pascal is The Mandalorian in the Disney+ series THE MANDALORIAN.

Late last year, another Star Wars spin off Story, the Mandolorian, was introduced to the public through the streaming app Disney+. Fans were beyond excited to see a new Mandalorian character, Din Djarin, and his friend, the Child (now Grogu). Directed by Jon Favreau (more widely known as Happy from many Marvel Movies), the series has been a major success among Star Wars fans, as well as people who have never watched it before. This fall, season two has been slowly released Friday to Friday.
Chapter 9: Din Djarin (aka the Mandalorian or Mando) is told that there is another Mandalorian on Tatooine that can help him map a network of Mandalorian coverts to find more of the Child’s kind – the Jedi. The other “Mandolorian ” ends up just being a town Marshal who wears Boba Fett’s armor, not a real Mandolorian. Cobb Vanth makes a deal with Din Djarin, who helps him defeat the Krayt dragon that has been terrorizing the town for ages, in exchange for the ancient armor he wears. They successfully slay the dragon with help from the former enemy Tusken Raiders, fellow inhabitants of Tatooine. The Child and Din Djarin continue on to their next mission. I really enjoyed this episode, as it showed Tatooine in a new light, as we mostly saw the farmlands and wide open areas with few neighbors around. People who didn’t know of hardships like the people in the community that Din Djarin visits, as the community had just started to build itself back up after the Imperial Army destroyed it.
Chapter 10: After failing to find a real Mandolorian, Din Djarin continues his search on Tatooine. A contact, who says her husband has seen a Mandolorian on Trask, a moon one sector over, agrees to give him the information if he agrees to give her a passage over to the moon with no hyperdrive because she is bringing her eggs with her, and the Mandalorian agrees. During the journey, they end up on an icy planet with spider-like creatures infesting it. These same creatures have been seen before in Star Wars Rebels, at the new rebel base the crew had been trying to set up. With barely enough resources to limp to Trask, the episode leaves off with everyone holding out in the cockpit. I have mixed feelings about this episode, not because of the way it is written, but because of those weird spider things, as I’m an arachnophobe.

Chapter 11: After crashing onto Trask, Mando drops his passenger off, where he is told to meet someone who agrees to take him to others of his kind. It ends up being a trap set up by a group of Quarrenthe. Three others of Mandalorian creed rescue him, including Bo-Katan, from The Clone Wars. Mando is suspicious of these questionable allies, as they remove their masks, unlike how he had been taught. They inform Din Djarin that he is a member of Death Watch, a group who in past times fought for power against the original Mandalorian creed, shocking news that he is unsure whether to accept. They agree to lead him to a Jedi, so long as he helps them sabotage a ship that has valuable information on where the ancient Mandalorian Dark saber is (which is something one of the Mandolorians once wielded; it was supposed to be a form of defense against the Jedi and their powerful lightsabers). I really enjoyed seeing others of the Mandalorian Creed in this episode, since it showed some progress in Din Djarin and the Child’s mission, which was necessary to the plot so viewers don’t get bored.

Chapter 12: Mando meets up with some old friends, who need his assistance on a mission to an old Imperial base and lab on the far side of the planet. Their final move to rid the planet of Imperial presence is successful, and they blow up the base and escape. They also find out that the remaining Imperial forces? are trying to use the blood of force wielders to create a clone of someone, perhaps Emperor Palpatine, Supreme Leader Snoke, or maybe an even more powerful being, as there are no more known Sith alive. They were all defeated in or before the final Star Wars movie. This is why they needed Baby Yoda. We also now know that Moff Gideon, an Imperial Officer who was thought to be killed during the Skirmish of Nevarro, is alive. I really like how this episode left a bit of mystery, leaving the viewers to think about what they think happened, or what they think is going to happen.

Chapter 13: The Child and Mando land on Corvus, a dead forest planet ruled by a power-hungry magistrate, in hopes of finding Ahsoka Tanoe. Mando goes into the barricaded town to investigate where to find such a Jedi. The queen offers him a beskar staff for the life of the Jedi Ahsoka. Ahsoka was a former Jedi Council member, but after being falsely accused of the murder of Letta Turmond, she left to recive help from former Separatist assassin Asajj Ventress, desperate to clear her name. From there she has been seen in multiple other Star Wars spin-off stories such as Star Wars Rebels. From Ahsoka, Din Djarin learns that the Child’s name is Grogu (I will still forever know him as Baby Yoda). Together they overthrow the Monarchy and free multiple prisoners. Obviously, my favorite part of this chapter was the inclusion of the character Ahsoka Tanoe, who I have gone into more detail about previously and will mention again later in the article.

Chapter 14: Din Djarin and Grogu go to the planet Tython to find an ancient jedi temple that has a strong connection to the force. There Grogu will decide if he wants to be trained in the ways of the force by one of the few remaining Jedi Knights who will hopefully find him, or if he wants to stay with Mando. While Grougu was activating the temple, a ship comes out of nowhere, carrying Boba Fett and a sharpshooter, who want the armor Mando recently collected. During the debut, multiple Imperial ships arrive with Storm Troopers, as they have been tracking Din Djarin through his ship The RazorCrest. The episode wasn’t named the Tragedy for nothing; Mando doesn’t get to Baby Yoda in time, so he is taken by the new “Force Robots” back to the giant Imperial Cruiser waiting above. If that wasn’t enough, the Razorcrest is blown to pieces; the only things left were Baby Yoda’s toy and the staff given to him by the Magestrid. This would have to be my least favorite episode of all, and would be the reason I would next time wait till the end to watch all the episodes so that you aren’t left with these absolutely tragic cliffhangers.

Overall, I really enjoyed the first five episodes. Each episode contributed to the plot, so it wasn’t boring, and there didn’t seem to be many “filler” parts. Looking at the Mandalorian from an artistic perspective, I was deeply impressed with the costumes, props, “puppets” (such as Baby Yoda) and scenery. I appreciated the diverse settings and characters, which is what Star Wars is known for. The computer generated images (CGI) were also incredibly well done. The scenes where there was jumping off ships and fighting against someone were more realistic than any previous Star Wars movie I have seen, and the sections with ships flying through space were also really amazing. I also liked that they included characters from all different Star Wars stories, such as Star Wars: Rebels, Star Wars: the Clone Wars, and the original and prequel Star Wars trilogies. For example, they included Ahsoka Tano, which I was excited about, as she has been one of my overall favorite characters from Star Wars: Rebels, Star Wars: the Clone Wars, and the book written based on her story, Star Wars: Ahsoka, a Book by E. K. Johnston. There has also been promise of another Star Wars: Rebels character, Sabine Wren, who may come up in later episodes. We also got to see Boba Fett, which greatly surprised me. The only thing I would mention in the negative was the fact that they did seem to end with a cliffhanger, which was slightly irritating, so if you are like me and don’t really enjoy cliffhangers, maybe wait until the end when all of the episodes have been released as I mentioned above.