Incredibly evocative, but subject to much controversy 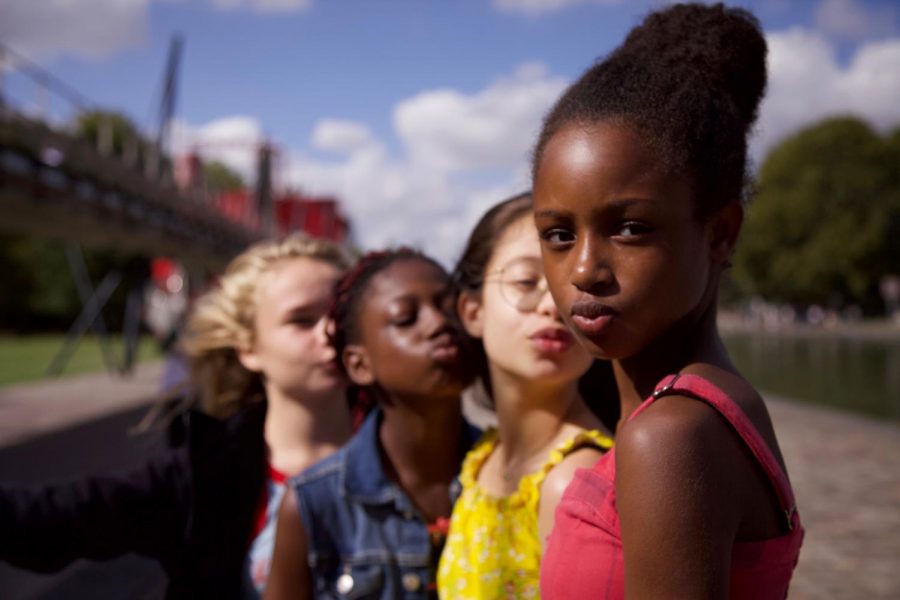 Directed by French filmmaker Maïmouna Doucouré, Cuties was released on Netflix internationally in September 2020. The film is incredibly evocative, following a young Senegalese-French girl who finds herself face to face with womanhood, under immense pressure to choose between two very different ideas of femininity. Although it won the directing award at the Sundance Film Festival and received praise from many critics, the film was subject to much controversy when released to the public.

The movie opens with the same scene with which it ends: the main character, Amy, with tears flowing down a face full of dance-competition makeup. There is no background noise other than songs sung in Wolof by Amy’s mother, sharply juxtaposing the rest of the scene.

From this first scene, the viewer can already see the two different sources of pressure on Amy: the sexualization of women in the media and the conservative views on women from her family’s Islamic beliefs. The tension between these two ideas intensifies throughout the rest of the movie.

Early on, Amy encounters another young girl in her apartment, Angelica, who straightens her hair and wears tight jeans and crop tops. In the school bathroom shortly after, she sees Angelica and her dance group giggling while they watch a pornographic rape video. To join their dance group, Amy has to prove she can dance. At home, she steals her cousin’s phone and begins to imitate sexual dance moves that she finds on YouTube and social media. After enough practice, she finally joins the group. They rehearse often and talk to each other about boys and sex. They encourage each other to dress more and more provocatively because this is how they learn to define womanhood. This is met by slut-shaming and reprimand.

Amy begins to wear more cropped shirts and tight pants at school, but immediately changes when she gets home. We encounter the other dominating definition of womanhood in Amy’s life though her grandmother and mother. Her mother’s husband is going to marry another wife. This idea is perpetuated when, days before her father’s wedding, her grandmother tells Amy she will teach her “how to become a woman,” beginning by preparing the food for the wedding day. Amy’s response to this is, “Already?” She is referring to the early wedding preparation, but also implying that she is not ready to become a woman defined by these ideals. The same day, Amy gets her first period and is absolutely terrified of it.

Amy is becoming a woman but has to choose between two equally degrading ideas of womanhood. In reality, there are two predominant definitions of modern women: the sex object and the wife. There is some point in every young girl’s life where we feel we have to pick between these two. Imitate the media and get reprimanded by older women around you, or follow tradition and be outcast by modern society. Cuties flawlessly evokes this tension, culminating in the last scene, which was also the opening scene. The dance group performs an incredibly sexual and provocative dance, to the sheer dismay of the (mostly older women) audience. While the remarks of disapproval from the audience fade out, Amy’s mother’s voice begins to sing in the background. Amy stops dancing and stands still, the camera focused on her face. With all her makeup, she looks like a mature woman. When she begins to cry, you can once again see a child, lost, searching desperately for her place in the world.

Although extremely difficult to watch, this film was beautifully done. However, controversy arose around the movie for two different reasons. Firstly, while condemning the sexualization of young girls, the film itself sexualizes them. In my opinion, this objection is unjustified. The movie openly and actively criticizes this. It depicts these graphic scenes of young girls in order to censure it, to explicitly show what young girls are pressured to do. The extremity of these scenes only contribute to the effectiveness of the movie. The second objection is much more valid and concerning: to publicize the movie and gain viewers, the marketing team appealed to the prurient interest instead of attempting to advertise it as a movie about assuming an identity as a young girl in modern society. More specifically, Netflix released a poster of a sexual image of the dance group, causing the #CancelNetflix backlash to trend. This was inexcusable, and Netflix apologized, taking down all advertisements for the film.

On google, the movie has almost 200,000 reviews, and more than 90% of them are one-star. In addition, thousands of people signed a petition attempting to ban the movie from Netflix. I have the strong suspicion that most of these people didn’t watch the movie. This controversy brought so much negative attention that it distracts from the genius of the movie and the importance of it’s message. The gut-wrenching scenes along with the clever cinematography contribute to the success of the film as an incredibly difficult but honest reflection on modern society. I strongly encourage anyone who cares about these issues to watch the film.