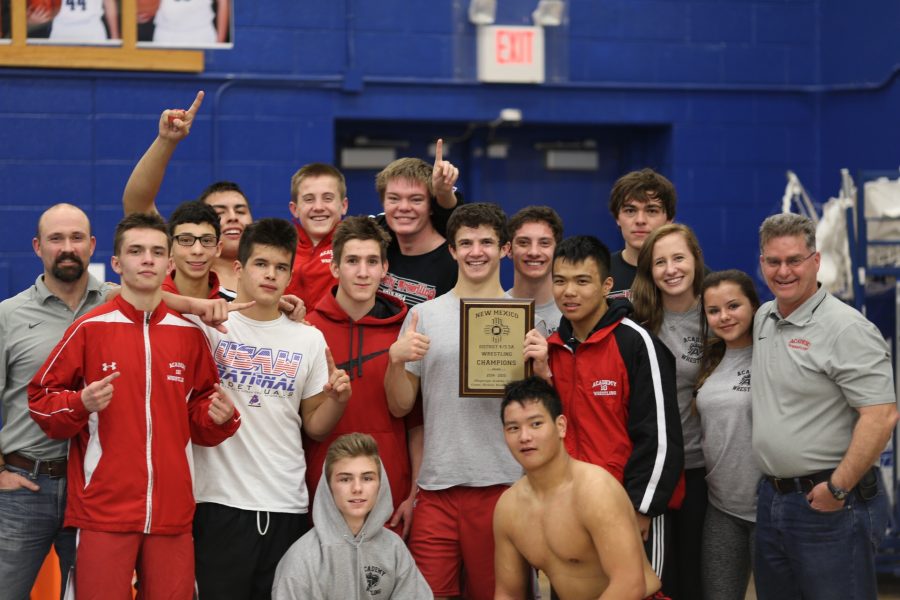 On Jan. 24, the Academy varsity boys wrestling team placed first in the District Duals meet, winning all five of their matches. This marks the first district win for the team in 11 years. The Academy beat Moriarty High School, St. Pius X, Grants High School, and Roswell High School before clinching the district title against rival wrestling team and host of the meet Goddard High School, 36-33. “I think the team did really well. Everyone really stepped up,” co-captain Ben Peterson ‘15 said.

However, there is little time for celebration. The Academy team’s advancement to the state championship tournament (Feb. 20-21) is reliant upon their success at the district individuals tournament at St. Pius on Feb. 14. Although the Academy team is the district champion, individual Academy wrestlers must still qualify at the Feb. 14 tournament in order to wrestle at the state competition. “[District Duals] was a great win for the team, but we still have the state tournament ahead of us so there’s no time to rest,” Julien Rodriguez ‘16 said. Regardless of these additional requirements to advance, the team remains optimistic of their chances at state. “I think the team will do well,” Peterson said. “We’ve sort of struggled over the past years, but I think we’ll be able to finish in the top 10.”

Upcoming wrestling meets include one this weekend, Jan. 30-31 in Las Vegas, NM for an individuals tournament and Feb. 4 against Valley High School and Eldorado High School in the East Campus Gym at 3:00 p.m. for team duals.