The New Age of Academy Football 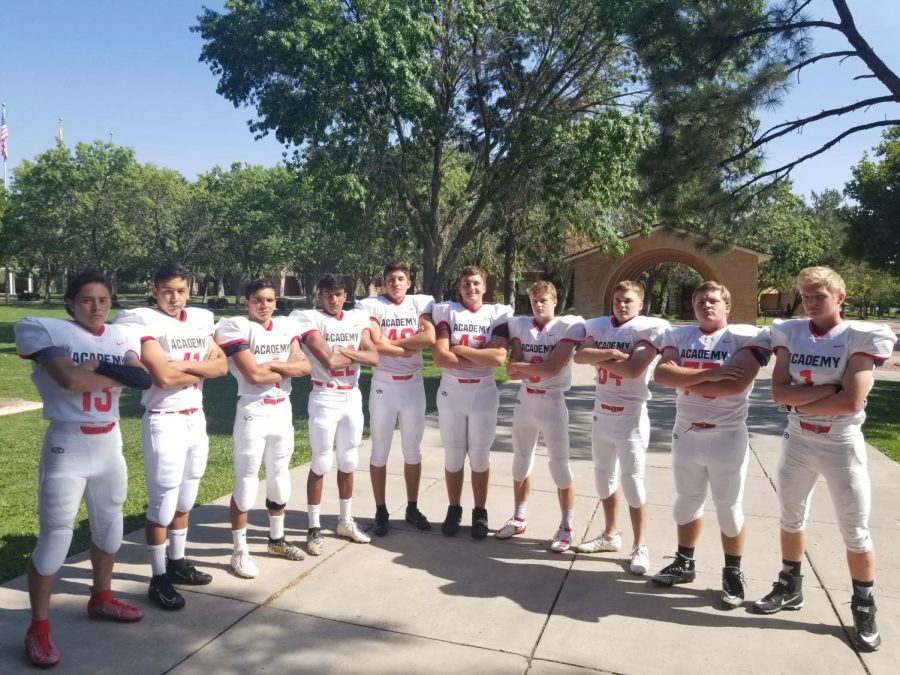 New seasons of every sport are bound to have some changes. Drastic ones are taking place on the Chargers Football team, such as the change in coaches over the summer. The previous coach, Kevin Carroll, has retired from that position after a storied career, and has passed the torch to a new generation of Academy football players. Two games into the 2019 season, the players exhibited impressive improvement. At their season opening game in Tohatchi, the Chargers won their first game of the season. Their first home game was on Saturday, August 31 against Tucumcari. Unfortunately, despite large

student turnout and a one-point difference for most of the game, the Chargers lost 27-20 in the fourth quarter. In Bernalillo, the Chargers lost 40-10, but the team redeemed themselves at their home game on September 14. When playing against Thoreau High School, the Chargers won 15-8 in a fantastic game. The Homecoming game on September 21 led to another win for the Chargers against Clayton HS.  But with the new head coach of the Varsity Football team, Shaun Gehres, many have hope that these will be just two of many wins in the 2019 season.

New head coach, Mr. Shaun Gehres, right, played football in highschool, and continued to play at Rhodes College. Once out of college, he started teaching and coaching at a prep school in Memphis. After nine years in Memphis, Mr. Gehres moved to Albuquerque and taught at Cleveland High for one year before moving to the Academy. In his first season as head coach, Gehres hopes to “create an environment that not only

teaches commitment, loyalty, teamwork, and good character… to also teach the game of football.” Coach Gehres wants his athletes to be able to “look back at football and say, ‘I learned a lot from that. I grew from that’.”

In the age of concussions, Mr. Gehres trusts new protective gear that is being used in helmets to better protect against brain damage. Along with new equipment, the team is taking extra precautions to prevent injury. To do this, Mr. Gehres plans on teaching players about preventing head injuries by learning about concussions and new tackling methods.

Aarya Patel ‘20, one of the new captains of the team, is ready for this new season, despite an injury to his elbow. Patel has been playing football at the Academy for six years, and he was in a leadership position during the change between coaches. After the first four games, he says that “Mr. Gehres’s personality matches well with all of the players.” And as he looks forward to the season as captain, Patel says, “I am glad to be leading a new team in a new football culture.”

Looking forward, the Chargers have a long way to go to complete the season.  But the team, which is currently 3-2, is off to a promising start. Students and teachers are always encouraged to go to home games and support the team in any way possible.