Culture and Artistry at the Chinese Lantern Festival 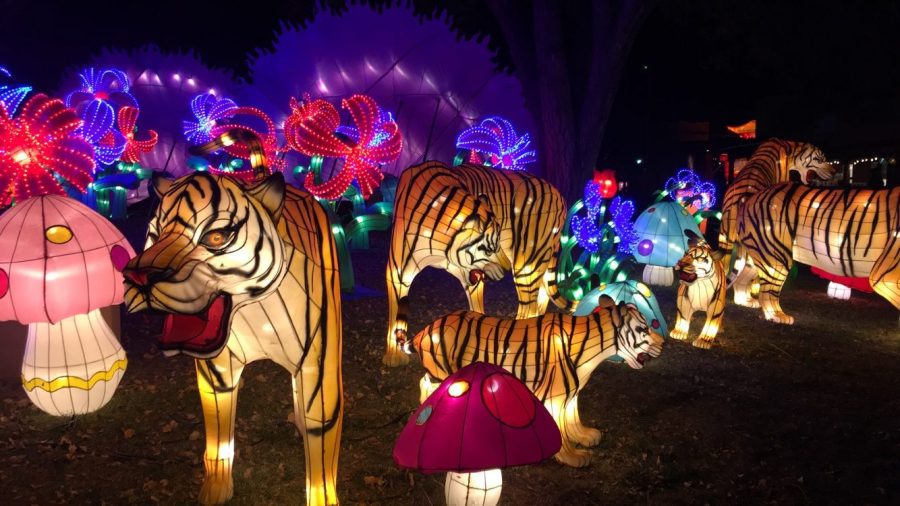 Over thirty beautifully illuminated lanterns in the shapes of pandas, peacocks, and other animals and sculptures were featured at the Chinese Lantern Festival this year. The lanterns were constructed by artisans from China, all with some cultural significance, including  an immensely large and long Chinese dragon visible as soon as you walk into the festival. Chinese legend says that  Chinese people are descendants of the dragon; the dragon is also said to bring good luck and ward off misfortune. The 12 animals of the Chinese Zodiac, cultural icons dating back hundreds of years, were all represented in the lantern show as well. Other displays included lanterns depicting white porcelain cups, doves—a symbol of peace—and a three-story high model of a Chinese temple.

In addition to the display of lanterns, Chinese dancers put on an impressive performance, including plate-spinning, contortion, face-changing, and Tibetan, Mongolian, and Uighur dances. The show was equally as stunning as the lanterns. Contortionists bent together in unbelievable movements and plate-spinners, holding four long rods in each hand, plates precariously balanced at the top of each rod. The three dancers never once dropped a plate as they climbed on each other’s shoulders and performed other moves that were already difficult without balancing eight plates. The face-changing act was absolutely mind-boggling. A man danced to traditional Chinese music, but with a sweep of his hand his face would change completely. A frowning black mask would transform into a smiling white mask in the blink of an eye. Each time the performer changed his face, the audience could be heard gasping and wondering where the last face went. All in all, it was an incredible spectacle.

In addition to the lanterns and performance, booths run by artisans were set up in an aisle, each full of handmade Chinese crafts. The most striking display was inner bottle painting, an art form where the artist takes a very thin paint brush and paints the inside of the bottle by maneuvering the brush through the top of the bottle. Calligraphic Chinese writing and traditional Chinese pictures are often painted in the inside of the bottle. Other crafts included knot-painting and dough-modeling. For the latter, the dough is made of flour, sticky rice powder, salt, and sesame oil, and can sometimes be edible. The festival was reasonable priced, about $10 for a ticket and $20 for a VIP ticket. Food was available for purchase, but it is recommended that you eat beforehand and dress  for a cold night. Overall, the Chinese Lantern Festival was a wonderful exhibition of multiple different aspects of the art of Chinese culture.