The largest active wildfire in the country 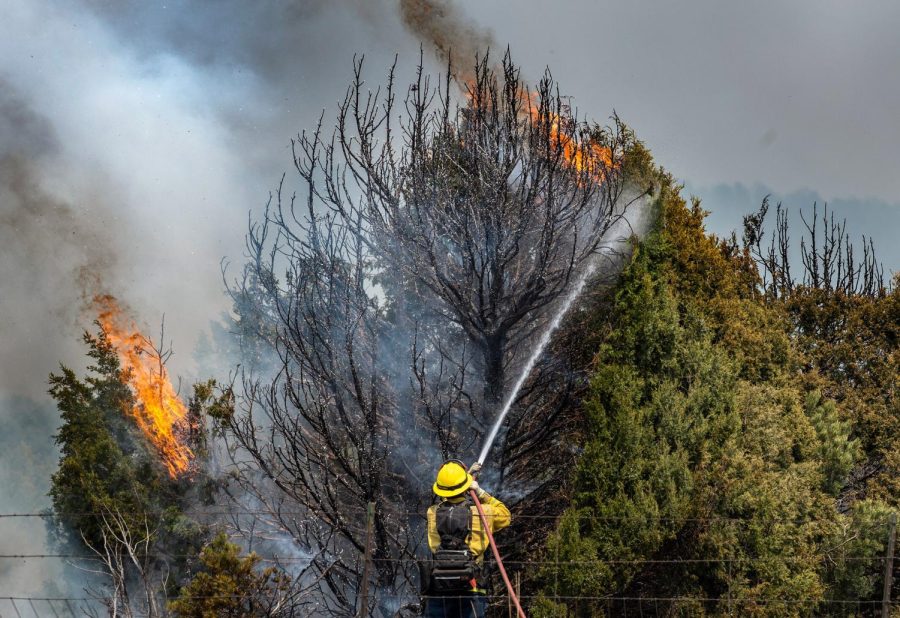 Firefighters battle the blaze near Las Vegas, Courtesy of AP.

The wildfire season across New Mexico this year has already been devastating. Fueled by intense drought, abnormal heat, and powerful winds, all a result of climate change, these fires have grown rapidly since early April, leading to the emergence of the Hermits Peak/Calf Canyon fire in northern New Mexico.

The Hermits Peak fire began on April 6, just northwest of Las Vegas, as a prescribed burn, where the U.S. Forest Service lit a fire to clear out the dry forest undergrowth in an attempt to prevent more fires from occurring in the future. It was pushed outside of its intended burn area when unexpected winds blew in, and it began to spread quickly. The Calf Canyon fire started two weeks later in Gallinas Canyon; the cause of that fire is still being investigated. The two combined on April 22, when extreme winds pushed them together to form what is now the largest fire in state history, breaking the record formerly set by the Whitewater-Baldy fire in 2012 that burned 297,000 acres. Burning over 300,000 acres, it is also the largest currently active wildfire in the United States.

Strong winds have made the movement of the fire particularly unpredictable, making it even harder to fight. Additionally, they ground fire-fighting aircrafts and create spot fires, new blazes started by the embers of the main fire. Because of this, keeping the fire contained has proven especially difficult. Temperatures have been warmer than normal throughout the state since March, which may also be contributing to the growth of the fire. New Mexico’s fire season, which usually peaks in late May and early June, has already seen a record amount of land burned in early May.

It is estimated that the Hermits Peak/Calf Canyon fire has caused 16,000 homes to be evacuated, affecting a total of more than 30,000 people. Many of these displaced people are currently staying in evacuation shelters across the state. Some families will be returning to houses reduced to ash as nearly 340 have burned.

The Albuquerque Academy football team led a drive last week where they collected items to aid emergency personnel and people forced to evacuate. They gathered two trucks full of basic supplies such as bottled water, body wash, and cereal. These were donated to local chapters of the International Association of Fire Fighters which will then distribute them to people staying in evacuation shelters. Anyone looking for ways to further aid fellow New Mexicans should consider donating to the All Together New Mexico Fund which provides emergency shelter, food, water, and other critical services to those affected. While this fire continues to be very destructive, people can continue to donate and support those in need.